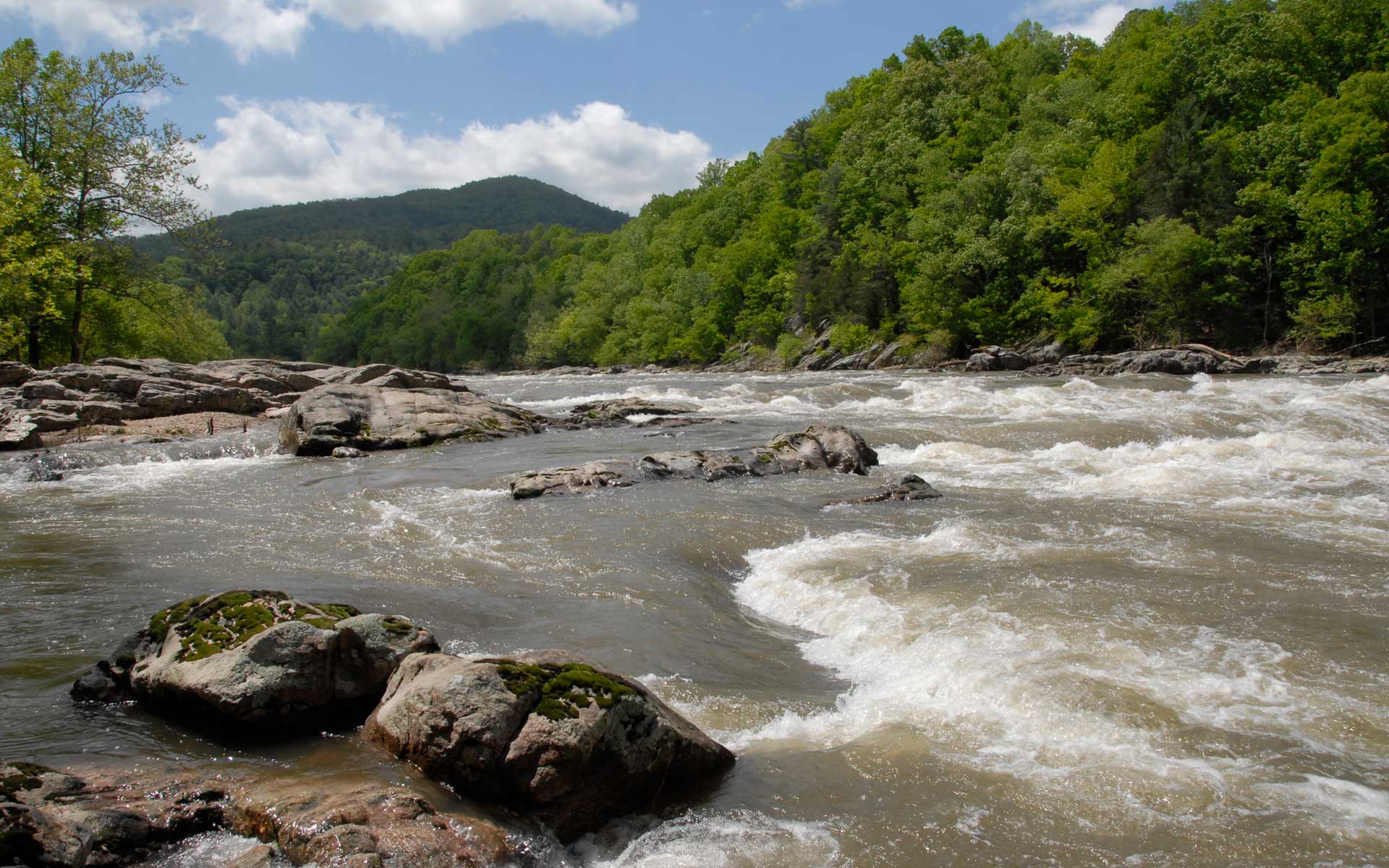 The French Broad River is a true gem in the Southern Appalachian Mountains and Asheville, NC. It is one of the oldest rivers in the world. In fact, only the Nile and New River predate the French Broad.

Average rapids range from Class II to IV with the majority in the Class III range.

Section 9 never disappoints and includes the most famous rapids in the French Broad River: the Maze, Big Pillow, Ledges and Frank Bell's rapids. This section also showcases the impressive rock features contained within the fault line of the Appalachian Mountains.

Our Calm Water trips begin at our Hot Springs Outpost and continue north down the serine and beautiful section 10 of the French Broad River.

During its 210-mile journey, the free-flowing French broad river covers calm, shallow sections and steep, narrow rapids. The river water levels fluctuate during the season depending on the rainfall in the region. At high water, we can experience Class V rapids and the river dynamics will change dramatically. During the spring, water levels tend to be the highest due to spring rains and snow melts. Water levels are the lowest in mid-summer.

The French Broad River has a long history of heavy pollution and environmental degradation. That changed when a handful of local activists and environmentalists helped draw attention to the problems of pollution. Chief among them was Asheville native Wilma Dykeman. In 1955, she published The French Broad, a groundbreaking book about the history of the French Broad River and a call to action to save it. Her dedication to the importance of the river to the economy of our region was instrumental to the growth of business and recreation.

In the years since environmental groups such as Riverlink have championed the recovery and restoration of the French Broad River and furthered the balance of economic development backed by stewardship. Today, Riverlink along with Mountain True, Asheville Greenworks and dozens of river-based businesses including French Broad Adventures, continue to push environmental efforts to sustain our river, our region and our livelihoods.

Those who raft the French Broad for the first time are often pleasantly surprised at how much warmer the water is in comparison to other rivers in the area because it is entirely free-flowing. Other area rivers are dam controlled, which means water is released from the bottom of lakes where temperatures are cooler.

The French Broad River was named by settlers centuries ago who were impressed by how wide it was, especially compared to many of the other small creeks and streams in the area. At the time it was originally named, the French-owned the land north of the river. So the derivation of the name is literal – the river is a wide, or “broad” river that flowed into the “land of the French” – a French “broad” river.

Before the new settlers arrived, this French Broad River area was in Cherokee territory. The river was integral to Cherokee livelihood and religion.

The French Broad River and valley are home to many species; including egrets, blue heron, hawks, eagles, tanagers, trout, small-mouth bass, catfish, crawfish, and many more.

When you are ready to see the river up close and personal, book an adventure with us.