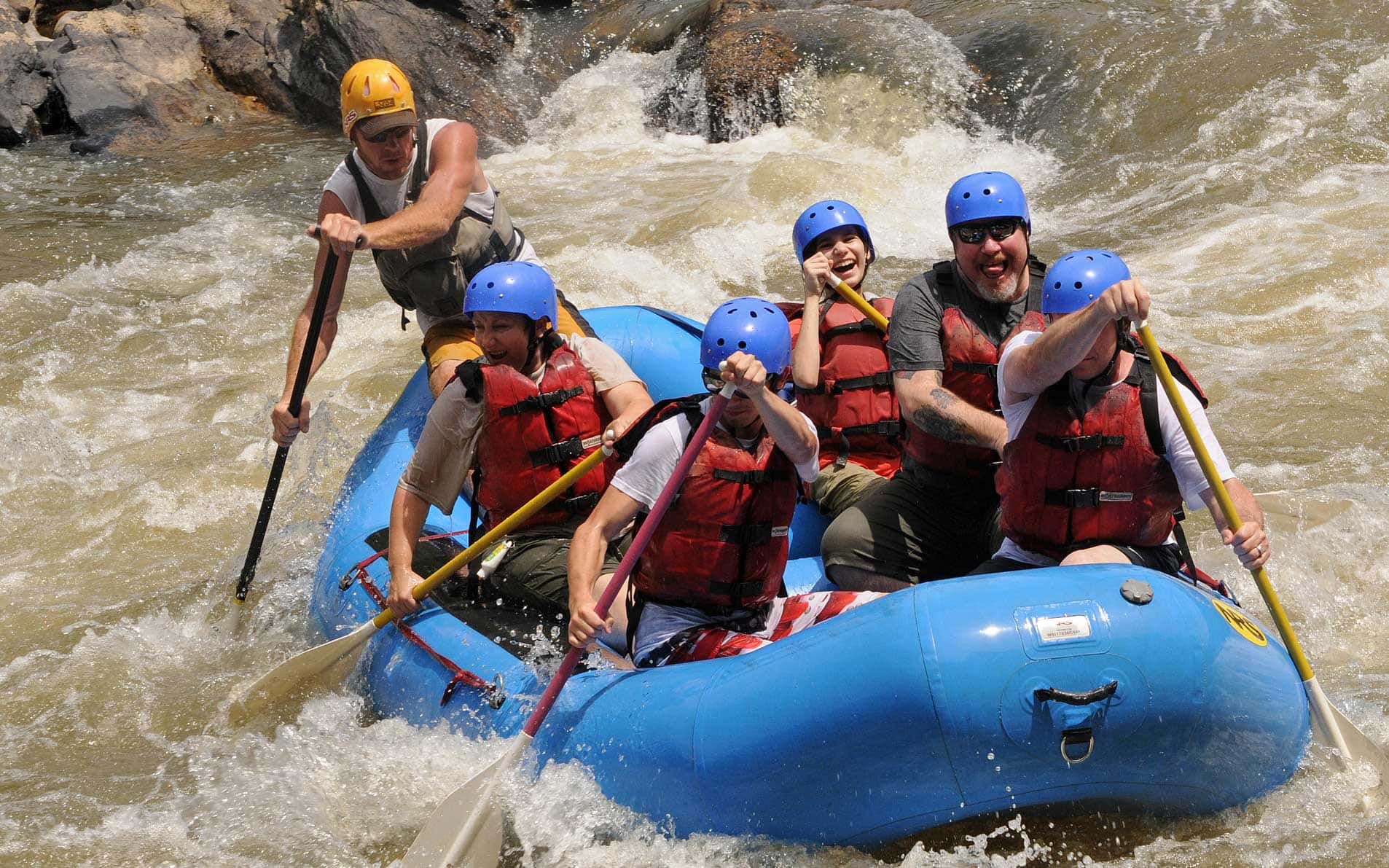 Whitewater is formed when a river’s gradient increases enough to disturb its smooth flow and create turbulence, i.e. form a bubbly or aerated, and rolling current so the frothy water appears white. The term “whitewater” also has a broader meaning, applying to any river or creek itself that has a significant number of rapids.

This whitewater classification scale is subjective. It is meant only as a guideline to describe a rapid or river. Remember that there is always a skilled raft guide in every raft on the class III-IV sections of the French Broad River when you choose French Broad River Expeditions as your rafting outfitter. The most widely used grading system is the International Grading System, where whitewater (either an individual rapid, or the entire river) is classed in six categories from class I (the easiest and safest) to class VI (the most difficult and most dangerous). The grade reflects both the technical difficulty and the danger associated with a rapid, with grade I referring to flat or slow moving water with few hazards, and grade VI referring to the hardest rapids which are very dangerous even for expert paddlers, and are rarely run.

Class I: Gentle moving water with some riffles and a few small waves.

Class IV: Strong rapids, fast currents, large waves, and bigger drops requiring multiple maneuvers to get through or around. This is the highest rapid you will experience at French Broad Rafting.

Class V: All of the characteristics of Class IV with the added excitement of being longer and more challenging, with many continuous features that may not be avoidable.

Class VI: Only a team of experts who carefully plan every aspect of this expedition would have any hope of successfully running and surviving these rivers and rapids.

Stream bed topography is the primary factor in creating rapids, and is generally consistent over time. Increased flow, as during a flood or high rainfall season can make permanent changes to the stream bed by displacing rocks and boulders, by deposition of alluvium or by creating new channels for flowing water.

The gradient of a river is the rate at which it loses elevation along its course. This loss determines the river’s slope, and to a large extent its rate of flow. Shallow gradients produce gentle, slow rivers while steep gradients are associated with raging torrents.

Constrictions can form a rapid when a river’s flow is forced into a narrower channel. This pressure causes the water to flow more rapidly (hence the name) and to react differently to riverbed events (rocks, drops, etc.).

A boulder or ledge in the middle of a river or near the side can obstruct the flow of the river, and can also create a “cushion”; a “drop” (over the boulder); and “hydraulics” or “holes” where the river flows back on itself–perhaps back under the drop–often with fearful results for those caught in its grasp. (Holes, or hydraulics, are so-called because their foamy, aerated water provides less buoyancy and can feel like an actual hole in the river surface.) If the flow passes next to the obstruction, an eddy may form behind the obstruction; although eddies are typically sheltered areas where boaters can stop to rest, scout or leave the main current, they may be swirling and whirlpool-like. As with hydraulics (which pull downward rather than to the side and are, essentially, eddies turned at a 90-degree angle), the power of eddies increases with the flow rate.

In large rivers with high flow rates next to an obstruction, “eddy walls” can occur. An eddy wall is formed when the height of the river is substantially higher than the level of the water in the eddy behind the obstruction. This can make it difficult for a boater, who has stopped in that particular eddy, to reenter the river due to a wall of water that can be several feet high at the point at which the eddy meets the river flow.

A marked increase or decrease in flow can create a rapid (where previously wasn’t one), “wash out” a rapid (decreasing the hazard) or make safe passage through previously-navigable rapids more difficult or impossible. Flow rate is typically measured in cubic metres per second (cumecs), or in cubic feet per second (cfs), depending on the country. 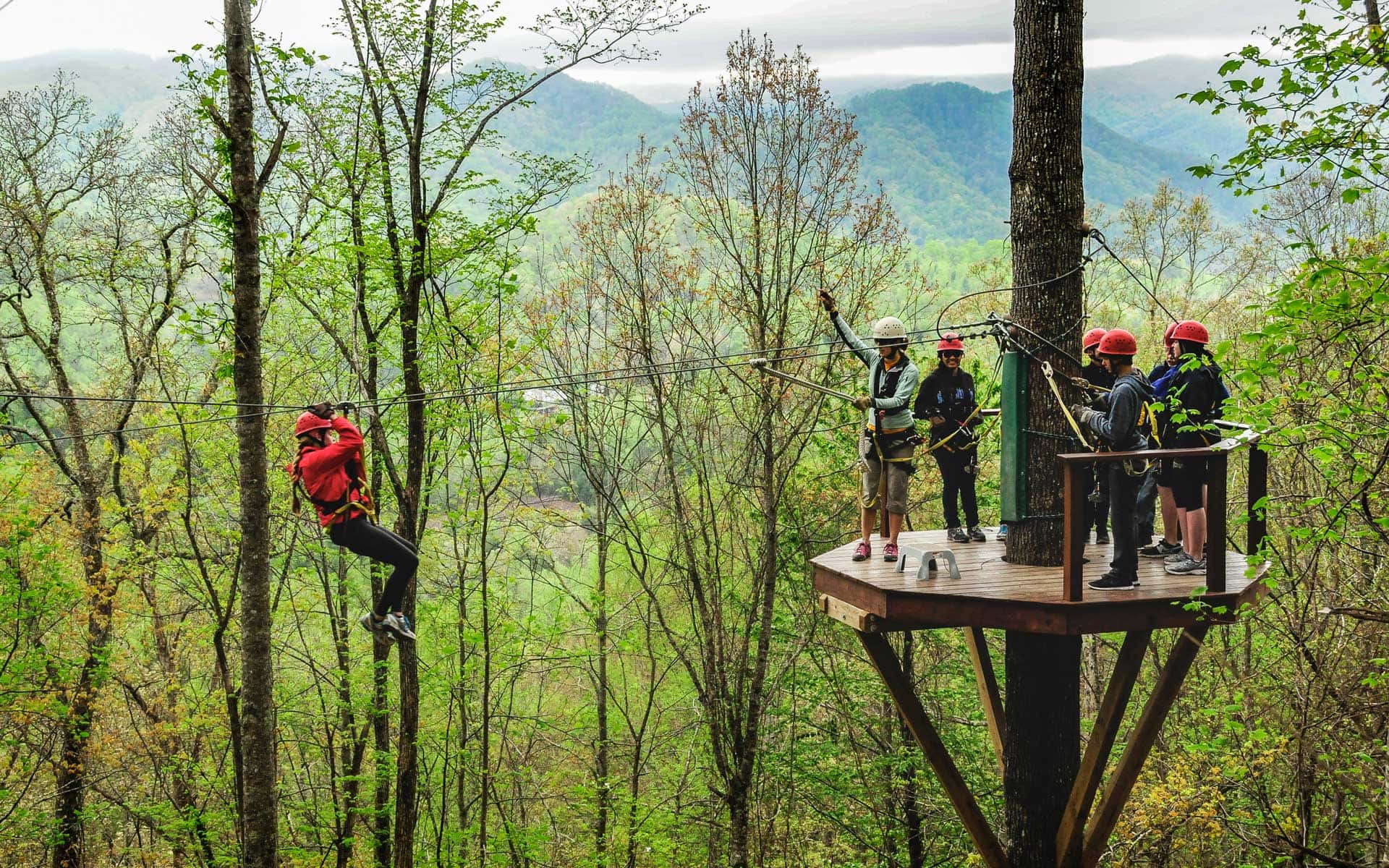 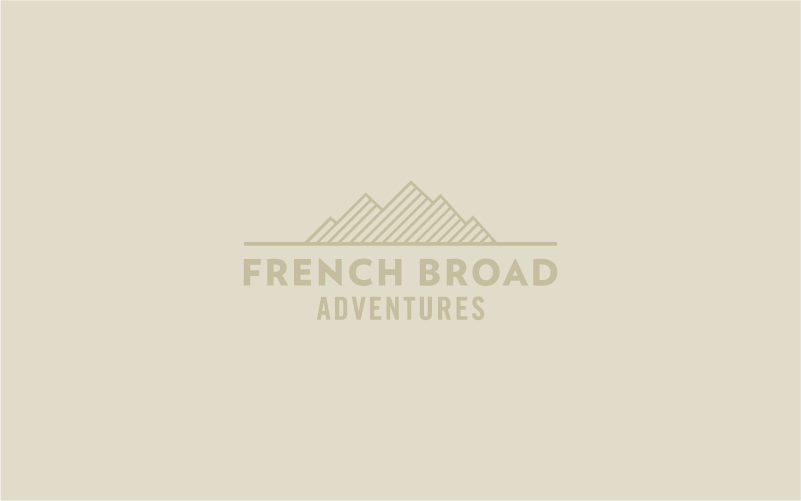 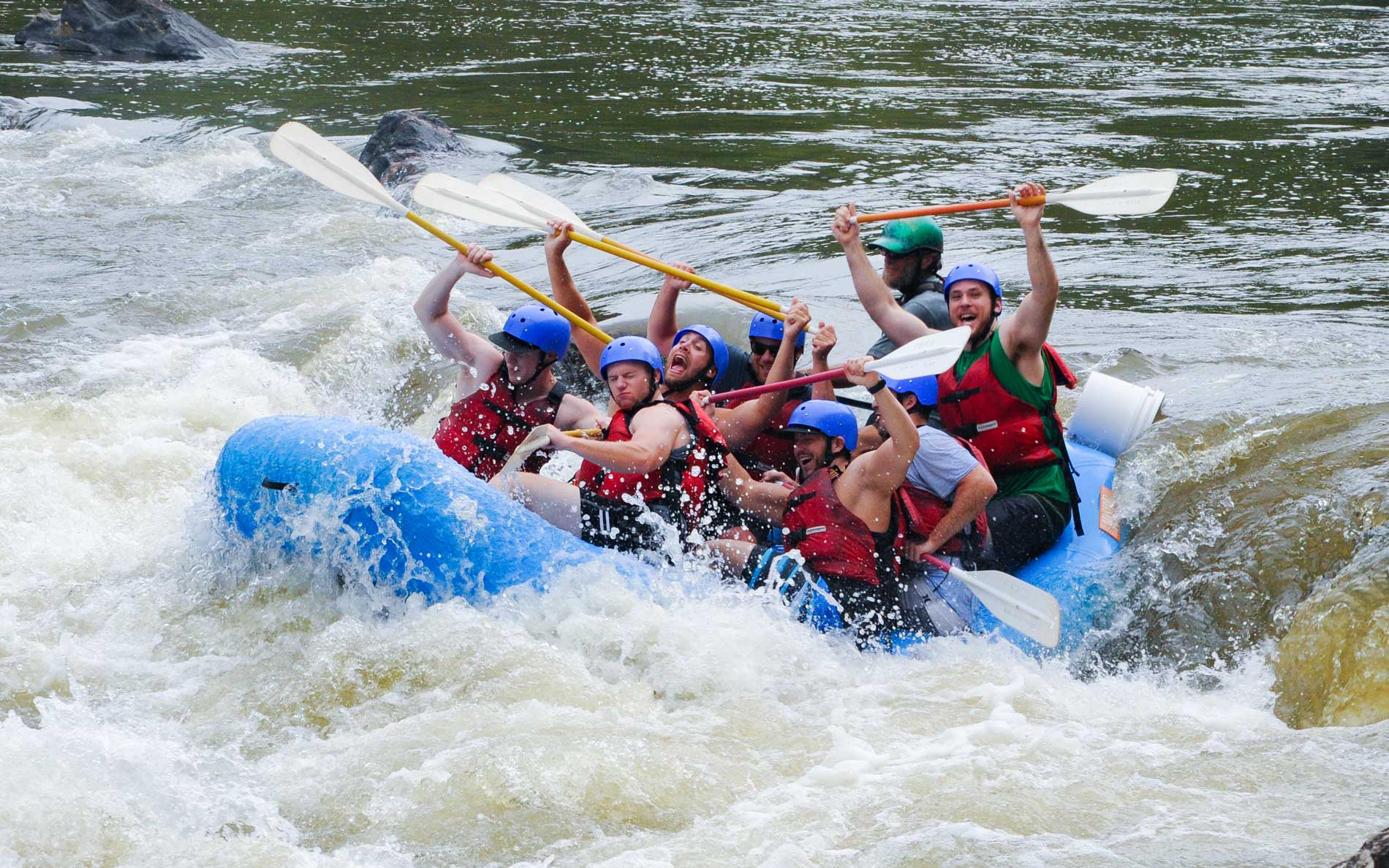 The Best Whitewater Rafting In Asheville and WNC! 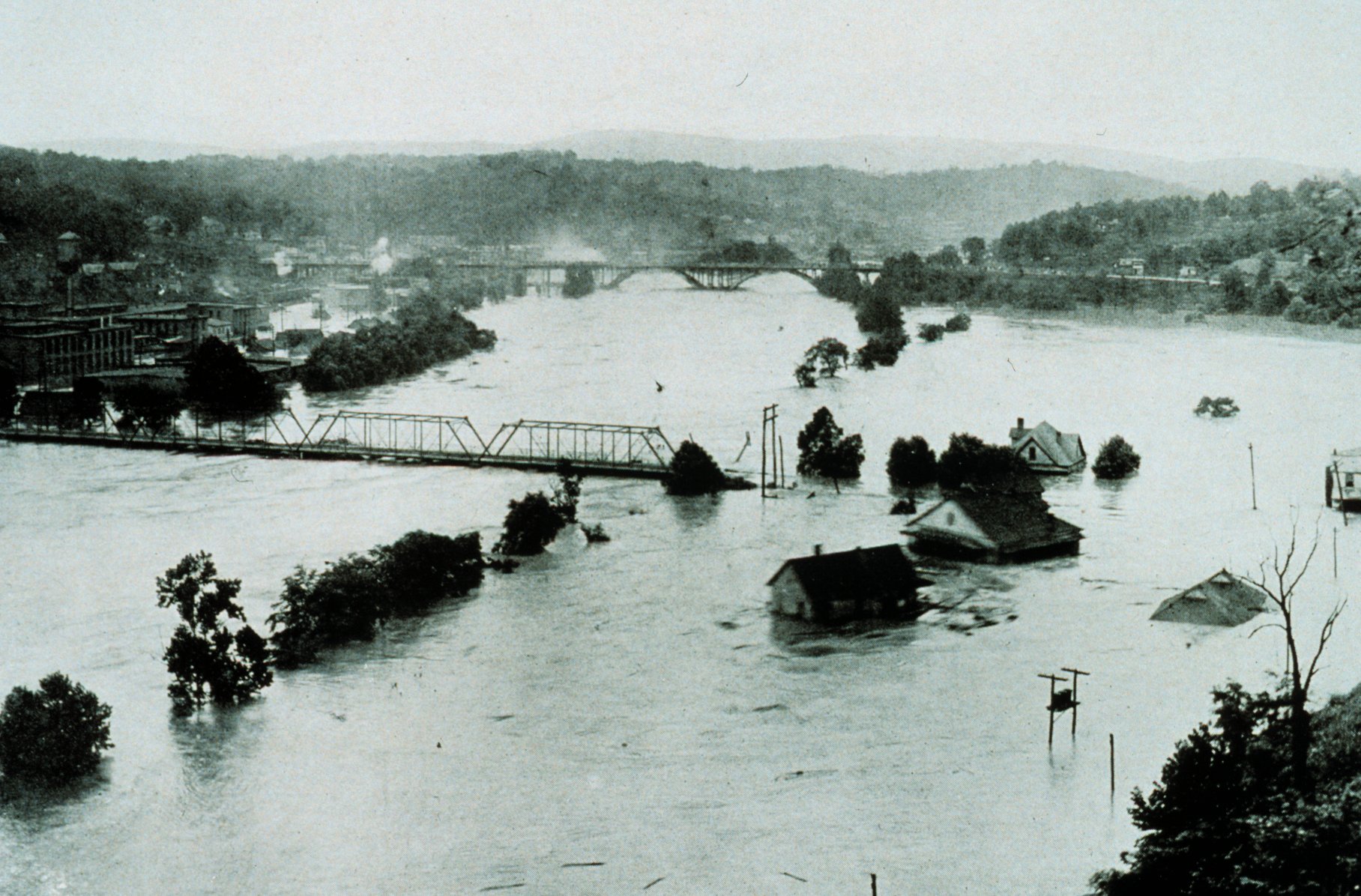 Remembering the Flood of 1916

Read More
What is Whitewater?
Western North Carolina Business First-ever to Receive ACCT Accreditation
The Best Whitewater Rafting In Asheville and WNC!
Remembering the Flood of 1916
Camping and RV Sites Around Asheville and Marshall North Carolina
“Bucket” Boats versus Self-Bailing Boats
8 Reasons To Whitewater Raft in the Blue Ridge Mountains with French Broad Adventures
8 Tips For The Best Zipline Experience Ever!
Be Social